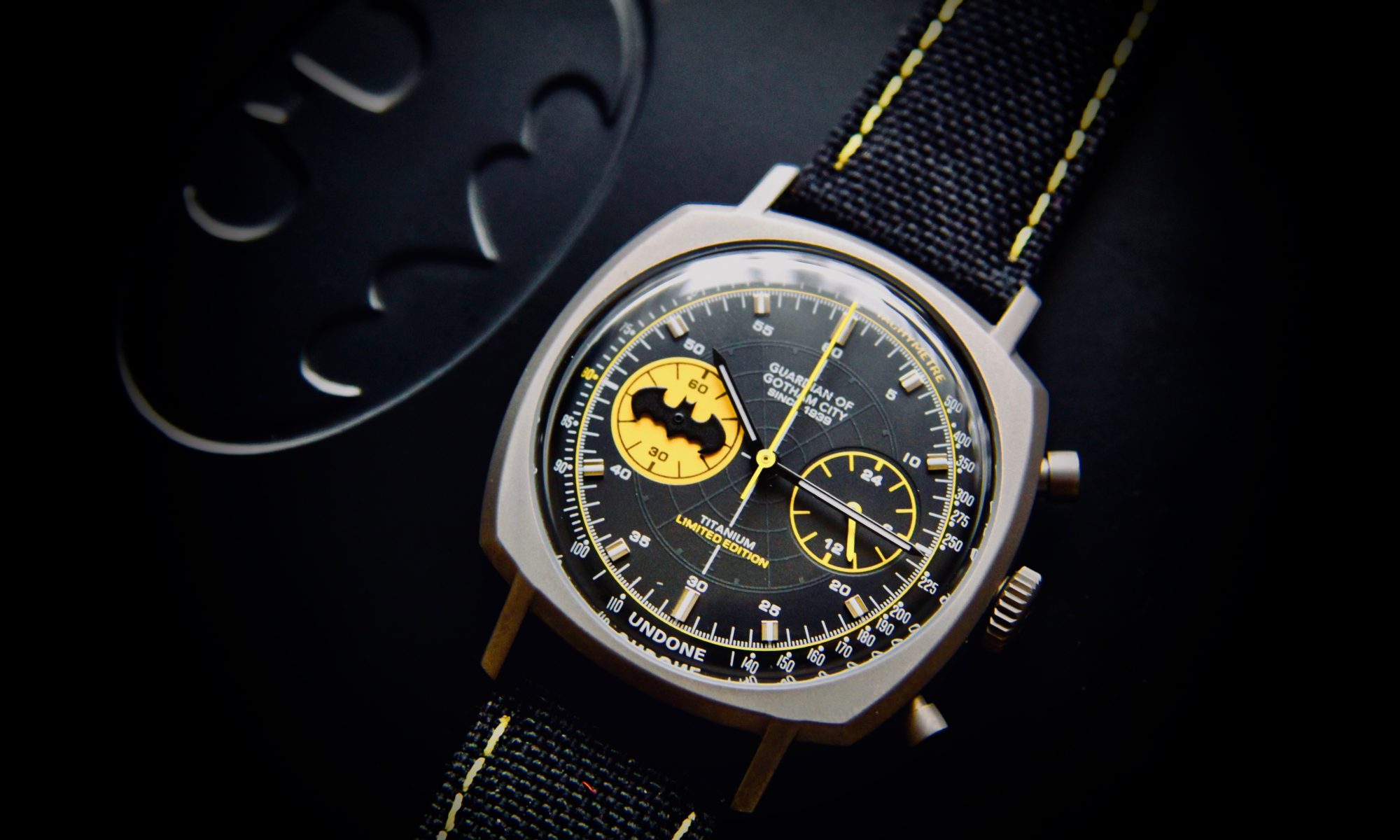 A few weeks ago, I got a watch that I was dreaming of for almost 2 years!

Yes, this is the Batman: Caped Crusader from Undone Watches!

I am a big fan of Batman since I was 4, I always watched cartoons on the TV, like Batman: The Animated Series or Batman of the Future. I also have seen all of the Batman movies.

While I am writing this article, I am watching the 1992 Batman Returns movie. Is it a coincidence?

So, I am a big fan of the legendary DC character, that’s pretty sure.

For the 80th anniversary of the first appearance of Batman in the Detective Comics, Undone made this eye-catching piece in collaboration with DC Comics in 2019.

Yes, it was in 1939 when the audience first saw our “Caped Crusader”.

Undone also realized the “Dark Knight” with the “Caped Crusader”.

You can check here the watch and its differences from my piece. 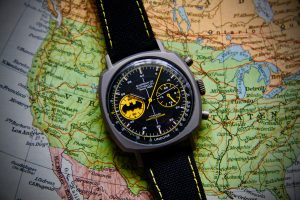 The watch came in a full black aluminum box. On the front of the box, there is a big Batman logo, and it looks mysterious.

When I opened it, I saw 2 cards inside of the box. The Undone warranty card, (which is 12 months long), and a special commemorative Batman 80th Anniversary card.

When I first saw the watch, my heart immediately started beating faster. I was so hungry for this piece and now it is in my hands!

It was a bit smaller than I thought it would be. The case width is 40mm without the crown and the case thickness is 13mm. These sizes are optimal for a dress watch. Not following the” big watch trends” of nowadays, but bigger than the usual vintage timekeepers. For me, this size is just right.

This is Undone’s first titanium watch and also the first cushion shape watch as well. The grey color is for the ultimate stealth, the intensive shoulder lines, the titanium material, and the shape are all reminiscent of the famous Batmobile.

The case is sandblasted titanium, nicely finished, the surface is really smooth. Touching its surface feels good, that is exactly how it should be. 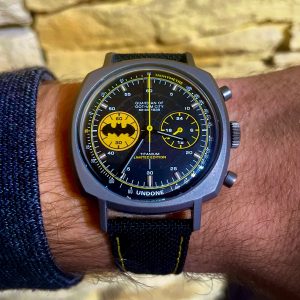 It has a 20 mm lug width, which is a good size for the 40mm case. The lug ends are a little bit sharp, and they should be smoother.

The back of the case is see-through, you can clearly see the movement. Behind the crystal, a Seiko VK64 movement works. It is a hybrid meca-quartz chronograph movement. In recent times, this movement became increasingly picked up among microbrands. It combines the accuracy of the quartz and the greatness of a mechanical movement.

When you press the start button it feels like a real mechanical chrono, and you will hear the ticking of the chronograph hand as well. Perfect for a watch like this.

To make the watch more special and unique, on the see-through case, there is the commemorative Batman 80th Anniversary badge. 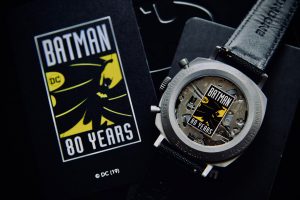 The straps are quick releasing black and yellow Cordura straps. Great matching for the dial, and proudly presents the colors of our superhero. It has only one free loop on it, and it is a bit loose, I could take it off quite easily if I would want to. The buckle is also titanium, and there is a Batman sign on it.

I am wearing it for about 3-4 weeks now and the adjustment hole I am using is a bit shredding. Just a little bit. But if I would like to keep the straps in a good condition, I had to change them. Maybe a NATO strap with the same color combination would look good. 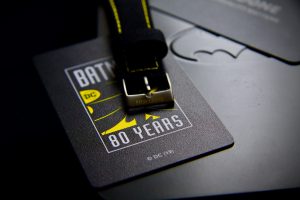 The dial is full of comic references, but you already know it!

The square indices are vintage style from the 60s and ’70s, but this is what an anniversary watch would need. The printed minute markers are displayed at each index, and a tachymeter also helps to complete the chronograph function. You can also find an easter egg on the outer tachymeter scale, the 80 is marked yellow to commemorate 80 years of Batman.

It has two subdials, a 24-hour indicator at 3 o’clock and a chronograph minutes subdial at 9 o’clock.

The 24-hour indicator is simpler than the other one. Just the Batman colors. The chronograph minutes subdial is more special. This looks like the Bat-emblem of Val Kilmer’s Batman, some people say it is more like Michael Keaton’s, but in Batman Forever it is more rounded.

On the main dial, there is a radar that glows in the dark. It comes from Adam West’s Batmobile. 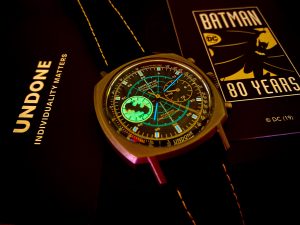 The Undone logo is under 6 o’clock as usual, above 6 stands “Titanium” and “Limited Edition” In the same line, under 12 stands “Guardian of Gotham City Since 1939”. It feels truly good to read something like this on a watch dial.

There are 3 main hands, the hour, and the minute hand, these are black with lume on it. The third one is the yellow chronograph hand without lume. The Batman color scheme can be found here as well.

The lume of the hands and the indices are blue. The dark reveals the green detect-a-scope on the main dial, and the yellow Batman-emblemed sundial also glows green.

The watch has a hardened Domed K1 Crystal and a 50m water resistance. Maybe the water resistance is low, because bats could not swim, or because it doesn’t have a screw-down crown. On the crown, there is a “U” mark from the Undone logo. The buttons are working well, they are easy to push.

You can buy the watch for €348 on the website, but you have to count on the tax. Though the shipping is free!

For this price, you don’t just get a meca-quartz chronograph watch, but a limited and official DC Comics collaboration Batman watch. I bet this will be worth much more than 348 euros for the collectors in the next anniversaries!

As far as I know, from each sold Batman watch, Undone donates a few dollars to Hope for Henry Foundation which helps seriously ill children and their families.

Batman helps people in every way!

Check out my YouTube review video here as well!

I hope Robert Patinson’s Batman movie will be another great movie in the line!