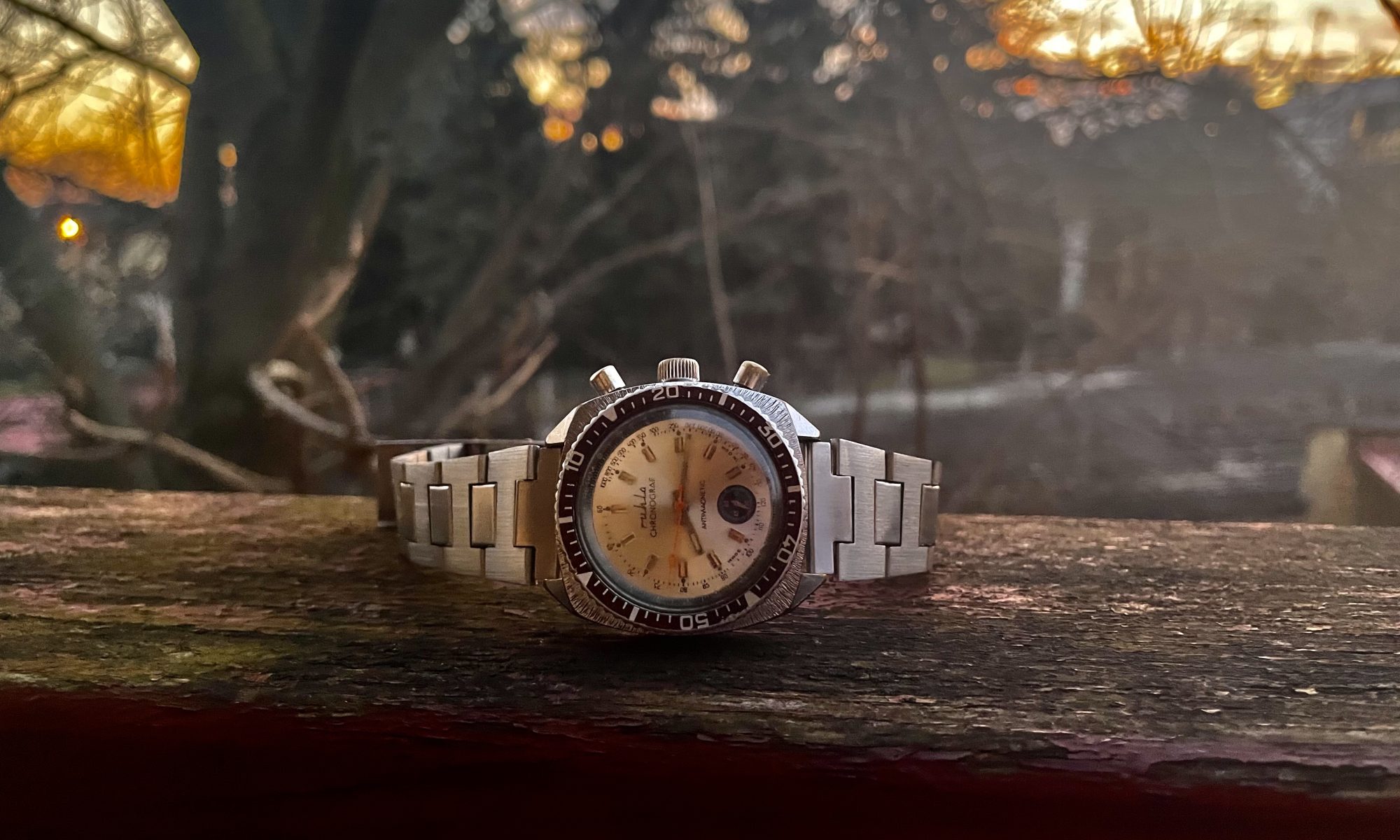 I bought this watch a few months ago. I was searching for it for months and finally I bumped into it on an online marketplace.

I got the watch for only 42$ which is incredible! Usually these watches are available around 280-330 dollars on the internet. So I could say it was a really good deal.

The guy who sold me the watch came from the same village as my grandparents. His father and my grandparents know each other! It is probably the destiny!

He told me he inherited the watch from his grandfather who bought it newly back in the days!

The watch rested for more than 20 years deep in the closet.

Ruhla was the first watch to be mass-produced and the first German watch in space. The name “Ruhla” comes from the name of the town where the watch brand was born 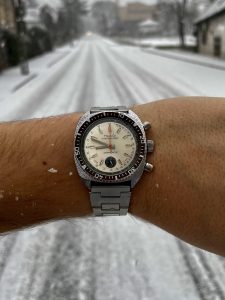 The watch has a brownish dive bezel which is bidirectional, you can rotate it easily. It is a little bit loose as well.

The crystal is domed plastic, but I couldn’t imagine something else in a mass produced vintage watch. A bit scratchy, but it can be easily polished.

The case has a nice and typical 70’s shape, which looks actually great for me. It is roughly finished at some parts, but I could say only the same thing like before, it was mass produced.

On the back you can see some writing (so we know it has a stainless steel back, it is antimagnetic, it was waterproof back in the days) and a beautiful mermaid. 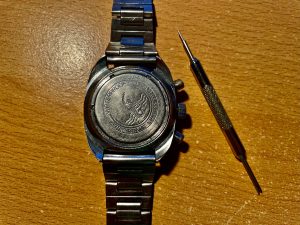 The crown has nothing special, it is a normal crown without a logo. Firstly I thought it is a screw down crown but sadly it is not.

There are two buttons for the chronograph functions, they are pretty worn-out.

The dial is really clear, bright and silverish. A truly nice and unique color for sure.

It also has a telemeter which is rare with a combination of a rotatable diving bezel.

The watch has a small second hand in a black subdial which is a great combo with the bright dial.The hour and the minute hands are luminous, but they are not so intense anymore.

The chronograph second hand/center stop-second hand is bright orange, great idea to make it more seeable on the silver dial. It is bended a bit, I can’t imagine what happened to it.

Inside of the watch there is a UMF-Ruhla Caliber 24-35 Chronograph manual winding movement. It works quite well, but definitely needs some cleaning! I couldn’t open the case, although I tried every case opener at home.

The watch came with its original steel bracelet which looks absolutely good, really comfortable for me.

All in all it is a great watch, looks good and I honestly like vintage chronograph watches. If you find one with a decent price you should go for it! But for 300 dollars you should choose something else.

Although it was mass produced, this watch is not a usual piece in the collections and it is rarely seen.

A quick nightstand shot! What do you think? #seik

Today’s choice!😎😁 How do you the IWC Por

Who is the real Watchmaniaq?!😅😎 #seiko #sei

A special piece for today for the fans! Yes, from